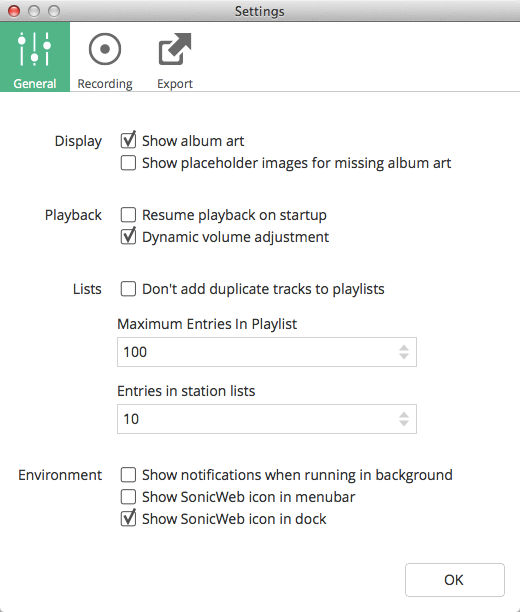 If "Show album art" is unchecked no album art at all will be displayed in the now playing panel.

The default is to show album art.

If "Show placeholder images for missing album art" is activated and SonicWeb could not find album art for a track, one of a few neutral music related images will be shown instead. If this setting is deactivated the SonicWeb Logo is shown for the missing album art.

The default is to show the SonicWeb Logo for missing album art.

If "Resume playback on startup" is activated SonicWeb will reactivate the radio station, station list or playlist on startup that was playing when the application was quit and additionally resume audio playback with the previously selected audio device right away. If the setting is deactivated SonicWeb will only reactivate the last radio station, station list or playlist. Audio playback will be paused.

The default is to not resume audio playback on startup.

If the "Dynamic volume adjustement" is activated SonicWeb will automatically raise the volume of silent tracks and lower the volume of loud tracks to keep a consistent volume while listening.

The default is to activate dynamic volume adjustement.

Even with station lists the same tracks may be streamed again by the activated internet radios. When you activate this option a track will not be added to the track list if it is already contained in the track list.

The default is to add duplicates to playlists.

You can choose from a minimum of 20 up to a maximum of 2000 tracks. When the maximum playlist size is reached SonicWeb begins to purge old, unpinned, already played tracks from the track list as new tracks are coming in from turned on radio stations. If the maximum playlist size is reached and there are no more tracks available to be purged recording will stop. After you listened to some of the tracks and new tracks are needed recording will resume automatically.

The default setting is 100.

"Entries in station lists" controls how many entries are transfered and shown at once when browsing radio stations and station lists.

The default is to transfer and show 10 entries at once.

Show notifications when running in background

If this setting is activated and SonicWeb is not the foreground application it will use the notification center to show information about the currently playing track.

The default is to not show notifications.

Activate this setting to show a SonicWeb icon in the upper right menubar. Clicking on the icon will reveal the miniplayer that allows quick access to the playback controls and currently playing track.

If this settings is activated SonicWeb will continue to run when the main window is closed. Use the "Quit SonicWeb" menu entry, the "Command-Q" keyboard shortcut or click the close button in the upper left of the miniplayer to quit SonicWeb when this setting is activated.

The default is to not show a SonicWeb icon in the menubar.

Deactivate this setting to hide the dock icon after the main window has been closed. You also need to activate the "Show SonicWeb icon in menubar" setting, so that SonicWeb will continue to run after you close the main window. 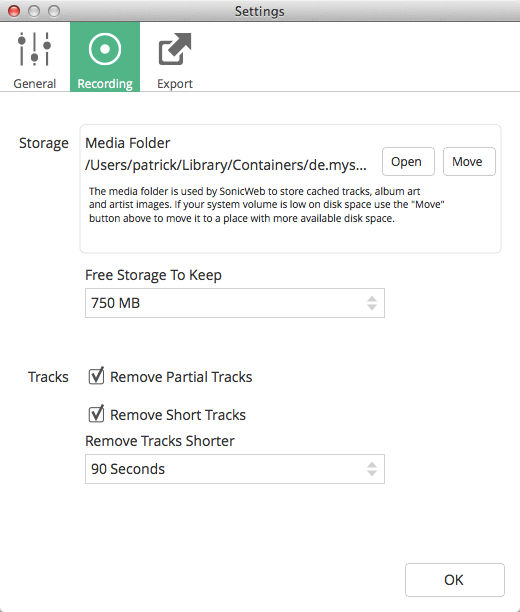 By default SonicWeb stores recorded tracks on the system drive. Use the "Move media folder" button to move the existing files to a different location. After this settings has been changed SonicWeb will store new recorded tracks at this location.

SonicWeb will need to restart if you change the media folder.

The "Free Storage To Keep" setting prevents SonicWeb from filling up your hard drive completely. If the limit is reached SonicWeb will stop recording until more storage becomes available.

The default setting is to keep at least 750MB of free storage.

If "Remove Partial Tracks" is set to on, partial tracks will automatically be removed from the track list. Partial tracks are the first tracks of radio stations that have just been turned on, tracks that were streaming when recording was paused and tracks were streams disconnected or reconnected because the internet connection was interrupted.

The default is to remove partial tracks and should be kept like this unless you really want to keep everything that has been streamed.

If "Remove Short Tracks" is activated short tracks will be automatically removed from the track list. How long a short track actually is can be defined with the "Remove Songs Shorter" setting. The default is 90 seconds. Short songs are usually radio jingles or short intro talk from radio station moderators.

The default is to automatically remove short tracks.

Use the export settings to choose the default settings for exporting tracks using the track action menu. 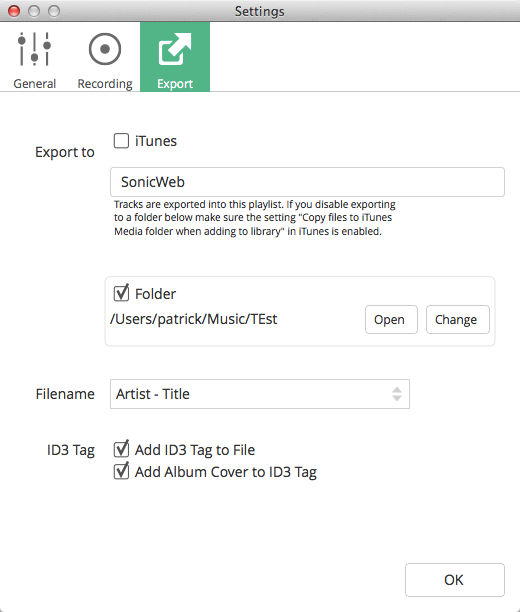 The "Filename" drop down list allows you to select the file name template that will be used to name files when exporting tracks. The default filename template is "Artist - Title".

Check "Add Album Cover to ID3 Tag" to additionally add the album art to the export files if available. The default is to add album art.