After more than a year of work a new version of SonicWeb for iOS is finally available in the App Store. It is an almost complete rewrite that features a lot of new and improved features. So what's new in SonicWeb for iOS 2.0?

SonicWeb for iOS has now the well received "light" design of the Mac version including the logo.

The user interface got restructured which makes it more intuitive and easier to use. It features a side menu that gives access to the main areas of the app. The now playing area is always visible at the bottom of the app while browsing radio stations or working with playlists. The now playing screen features big album art and gives quick access to the currently playing playlist.

Apple Watch support has been added. You can start a radio station from your facorite list, control playback and pin or add tracks to playlists directly from your Apple Watch. 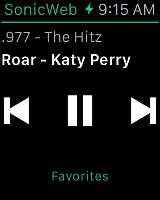 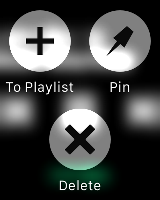 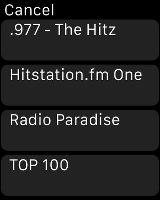 If needed the beginning and end of a track can now easily be adjusted using the trim dialog.

Many users wanted the ability to export recordings to their Mac or PC. This is now part of SonicWeb 2.0. Users have complete freedom of choice with exporting because SonicWeb for iOS 2.0 allows to export recordings using any app that supports the iOS share sheet mechanism like like Dropbox, Weafo or Transmit for iOS.

Add Your Own Radio Stations

The SonicWeb radio database already contains more than two thousand radio stations. If a radio station is missing it can easily be added within the app now. Also, as previously, radio stations can still be suggested using the in app form or mail of course.

In addition to recording and splitting into tracks you can now listening live without any recording just like with a regular internet radio player. To record complete mixes, transmissions or live concerts the new continuous recording mode can be used.

Sometimes radio stations send the wrong information about the currently playing artist or title. SonicWeb for iOS 2.0 allows users to manually edit the track information. SonicWeb will try to download album art again after changes have been made.

I hope you enjoy this new major version of SonicWeb for iOS :-)